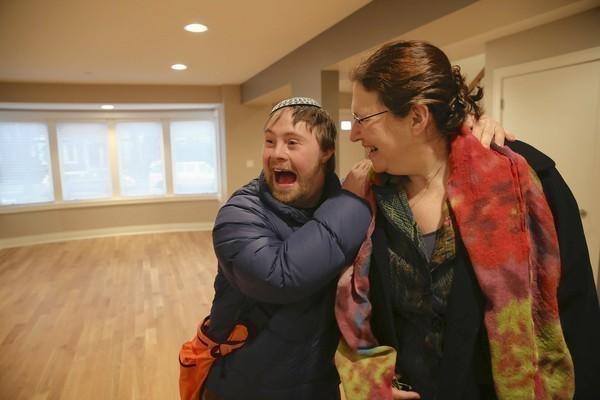 Jacob Mosbacher, 25, is excited to show his mom, Joan Katz, his new home last month as he and other clients of the Libenu home check out the special-needs house in Chicago’s West Rogers Park.

Jacob Mosbacher, 25, is excited to show his mom, Joan Katz, his new home last month as he and other clients of the Libenu home check out the special-needs house in Chicago’s West Rogers Park. (Nancy Stone, Chicago Tribune)

Baruch and Joyce Schur were out of options. They couldn’t find anywhere for their physically and intellectually disabled 26-year-old son to live, at least nowhere that met their criteria or didn’t have a yearslong waiting list.

The 55-year-old couple made plans to move out of the state. Uprooting themselves from their native Chicago, leaving friends and a family business, was the only way to give Josh a home — not an institution — that offered independence, a kosher kitchen and a sense of community before his parents became too elderly to care for him.

But then the Schurs took an even bolder step. They joined forces with five other families in similar circumstances to do what government could not: They created something better.

They become a nonprofit, raised their own money, bought their own property, hired a design team and a social services agency to staff a home. This month, six young men — with cerebral palsy, autism and Down syndrome — moved into a red brick Georgian on a lush block in the same Rogers Park neighborhood where they grew up.

Other parent-empowered groups are also rolling up their sleeves, joining this quiet crusade. A Glenview couple is working with Rush University Medical Center to construct housing for young adults with autism in the West Loop. In Wheaton, another family group collaborated with their church for a similar project.

In a previous era, children such as Josh Schur would have been institutionalized, their parents told to leave them in the hospital and forget about them. Today, because of medical advances and sweeping public policy changes, children with disabilities are not just surviving but thriving into adulthood. And no one knows what to do with them all.

There are 1 million to 1.5 million Americans with autism alone, 80 percent of whom are under the age of 22, according to the federal Centers for Disease Control and Prevention. In Illinois, about 22,500 people with disabilities are waiting for services, the Department of Human Services reports.

“The statistics are frightening,” said Tony Paulauski of the Arc of Illinois, an advocacy organization. “What’s going to happen to all these folks? We are bracing ourselves for a demographic wave … and we are totally unprepared.”

These young adults were born into a very different world than earlier generations. Parents started seeing their offspring for what they could do — not just what they couldn’t.

They pushed clinicians for more physical, occupational and speech therapy and lawmakers toward mainstreaming policies. No longer hidden away, these youngsters were now woven into society, participating in school plays, soccer and Boy Scouts.

Then, at age 22, most publicly funded services end. As the kids get older, the journey gets lonelier. Some 80 percent of young adults with autism ages 19 to 30 still live at home, according to a 2008 Easter Seals study.

“People see how futile the situation is,” Paulauski said. “And as government continues to shrink, it becomes even more important that families look at other sustainable models.”

The Schurs, who have two other sons, were being consumed by the day-to-day challenges of raising a child with cerebral palsy. The visits to doctors, the financial pressures, the physical demands all exact a steep toll. For example, Joyce Schur would call her husband at work when Josh needed to go to the bathroom because she no longer could lift her 130-pound son from his wheelchair.

“I watched these kids grow up, and I couldn’t believe that we had nothing for them,” said Shana Erenberg, a special education consultant. “I was embarrassed for my state.”

So when Baruch Schur called Erenberg in 2009 to say they had bought a house in New York that offered more and better services, “it was the last straw,” she said. “He was the fifth or sixth parent to call me that week (with concerns about housing) … and I just had enough.”

For Schur, it was the only solution. “If we stayed in Illinois, we had two choices: A nursing home or a nursing home,” he said.

That night, Erenberg set out to create a home that offered safety, friendship, kosher food, activities and interiors that said “Pottery Barn” more than “state facility.”

She reached out to Ald. Debra Silverstein and, along with Baruch Schur, they identified six potential clients and took their proposal to the other parents, who listened politely but didn’t have a lot of faith that such a vision would become a reality, Erenberg said.

That’s how the Libenu Foundation — Hebrew for “our heart” — gained traction. Parents and other volunteers scoured the nation for models, cherry-picking the best practices at residences from New York to Phoenix, then patrolled the Orthodox Jewish neighborhood for property, eventually settling on a three-bedroom home, which cost $400,000. They poured in another $600,000 to make it seven bedrooms and handicap-accessible.

Each family made a financial commitment — although they declined to give an exact amount — and held numerous fundraisers, taking their story to anyone who would listen. The bricks and mortar are only one part of the equation. Services such as aides, transportation, recreation and personal care are managed by Clearbrook, an Arlington Heights-based agency, and are paid for, in part, with public funding.

One of the most expensive items was an elevator, needed only for Josh Schur. His parents argued that this wasn’t cost-efficient, but the other families insisted that it stay in the budget. If this venture is to work, they said, it has to work for everybody.

Still, debate could turn heated at times. Should they have live-in staff or employees working an eight-hour shift? And how would they juggle clients’ many dietary needs?

“I couldn’t believe we could get so far … only to have it all fall apart over a gluten-free challah,” Erenberg said.

And there also was opposition from the neighborhood. Rumors percolated about a halfway house for unwed mothers and ex-convicts. “Anytime you have change, you bring in fearfulness,” said Silverstein, who quelled concerns at a block meeting.

Finally, in late December, the young men moved into their new home, a triumphant moment, as the clients checked out their new rooms. Another residence for six young women is scheduled to open in Skokie this week.

The benefits of small, family-scale housing versus large institutions is a matter of individualization and autonomy. Like anyone else, people with disabilities are happier when the environment adapts to their needs and interests, from what they want for dinner to what movie they want to watch to what time they want to go to bed.

Jane Doyle has seen the growth of this movement since opening the Center for Independent Futures in Evanston, which trains parents to create housing for their children.

A decade ago, Doyle was a trailblazer when she and another mother started the nonprofit to help their own two disabled daughters, who were eager to take the next step after high school, just like everyone else. A bed at a state facility in Peoria isn’t what the mothers had in mind.

After one particularly disheartening day perusing traditional venues, Doyle announced she was done. “Why try to fix an overburdened system?”

They opened their first home, a three-flat in Evanston, in 2004. To date, the center has created 12 residences, mostly in Illinois. The nonprofit is working with seven family groups, from Sarasota, Fla., to Los Angeles.

“When families get together and have a chance to be creative, it’s amazing what can happen,” Doyle said.

Many of the inquiries to the Center for Independent Futures come from siblings of disabled adults who suddenly find themselves thrust into the role of caregiver after the death of a parent, Doyle said. “They have their own jobs, children, lives — and they call up and ask, ‘What do we do?’ They have no preparation whatsoever.”

Joan Katz, one of the Libenu parents, was determined that would not happen. Her son, Jacob Mosbacher, who has Down syndrome, has been the beneficiary of years of enrichment and learning. At 25 he is an artist who has displayed at city galleries, has his own website and proudly pointed out the colors and finishes he selected for his new home, while she beamed.

“As a parent, this is a blessing, but for siblings, it’s a double blessing,” she said. “And for Jacob? It means he has a life.”