Who Brought Light Into Our Lives 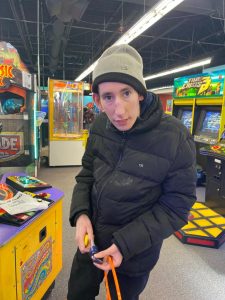 The Libenu community mourns the passing of our beloved client Michoel Shalom Chaim Grinblatt, z”l. Michoeli was a precious gift to all of us, and it was our great privilege to care for him for almost ten years.

Michoeli came to Libenu from the home of his wonderful family, who modeled the type of love, respect, and belonging we wish for all people. He was embraced and fully included by his entire family – his parents, Bryna and David Grinblatt; his brothers and sisters and their spouses, Dovi and Adina Grinblatt, Sorala and Eitan Zeffren, Elie and Hadassah Grinblatt, Estee and Eliezer Dusowitz, Yitzi Grinblatt, and Taiby Grinblatt; grandparents Ronald, z”l, and Lillian (ad meah v’esrim) Jacoby; Ben Grinblatt, z”l; Rabbi Moshe Noble, z”l, and Fay (Grinblatt) Noble, z”l; and many nieces and nephews. The family’s acceptance and loving treatment of Michoeli throughout his life gave strength and encouragement to other families who had children with special needs. 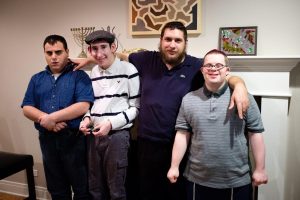 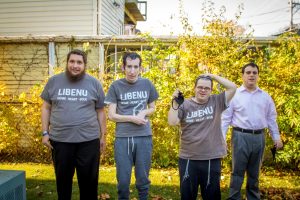 When Libenu began planning our men’s home, we reached out to Michoeli’s parents to invite their son to join us. They later reflected that those conversations reversed a lifelong pattern: Instead of endless waiting lists for services, a new opportunity for Michoeli was literally calling out to them. When Michoeli moved in, he brought a priceless housewarming gift: his “sever panim yafot” – a uniquely welcoming countenance. Michoeli greeted everyone with a big smile and a cheerful face. His smile filled the room with sunshine as he engaged those around him – roommates, staff, volunteers, visitors, and community members. His exuberance far exceeded his facial expressions, as he often used his entire being to let us know he was happy to see us. Michoeli was truly a son of the community, and to know him was to love him. 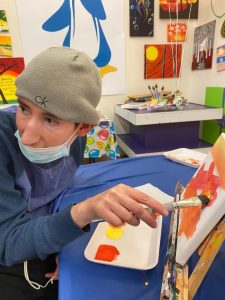 Despite his significant disabilities, Michoeli was deeply spiritual and had a love of Judaism. He showed great joy for Shabbat and holiday celebrations. Michoeli also enthusiastically embraced the opportunity to put on tefillin. In fact, when the Chicago Mitzvah Campaign volunteers walked in the door, he ran to get his tefillin, illustrating the precept of “hevei ratz l’mitzvah” – running to do a mitzvah. When he went to shul, Michoeli’s excited vocalizations, that others might not understand, formed prayers that undoubtedly reached Hakadosh Baruch Hu, poignantly and directly. At a recent Libenu shiur (Torah class), Michoeli participated by adding his vocalizations to the discussion. Through his own unique way of participating, Michoeli was fully engaged with his peers.

Michoeli’s joie de vivre carried into Libenu’s other activities, such as our weekly bowling league, music therapy, art classes, Nickel City outings, and even our pre-Pesach “Extreme Makeover” haircut day. On what was to be his final outing, a trip to Wrigley Field, he expressed his delight by running around the ballpark with his friends as they enjoyed an incredible behind-the-scenes tour. 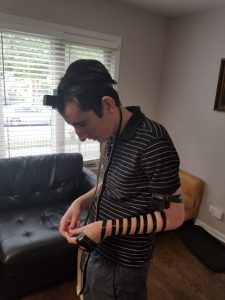 When Michoeli suffered medical setbacks, his special neshama inspired people around the world to daven and say Tehillim on his behalf. People who knew Michoeli, along with many who had never met him, came together in person and virtually, around the clock, to storm the gates of Heaven. Michoeli helped others to elevate themselves and reach beyond their own needs to answer a higher call.

Michoeli had a profound impact on those around him, creating a bond of love that will not be forgotten. He brought out the best in everyone who knew him. Michoeli inspired us to look beyond his disability and to value the unique strengths that were his true essence. His smiling face and pure neshama will forever accompany us in our work to ensure that people with developmental disabilities have opportunities to live rich, meaningful lives.

The entire Libenu community grieves for Michoeli, and our hearts are with his family as they mark the end of shloshim.

Tehei nishmato tzrura bitzror hachayim – may Michoeli’s soul be bound up in the chain of life, and may his memory always be for a blessing and an inspiration.